First Race Completed, On To The Next One...

My race yesterday was AWESOME!! About a thousand times harder than I expected, but that was due to the fact that I had no idea what I had gotten into. But the unknowingness about the race made it so much more amazing when I crossed the finish line.

In case you haven't been following, the race's website had no information on the 5K I had signed up for. The only info given was that the 10K had 1000+ feet of elevation gain. I assumed (which is never good) that the 5K would be nothing like it. Boy was I wrong!

For a mile straight we ran up and up and up a hill. By my best estimation it was about 700+ ft. of elevation gain. It was steep and rocky and the trail completed gutted out by years of rain. It was so steep that at one point EVERY person had to walk part of the hill. As if running up the hill wasn't hard, you should have seen the down hill. At that point I was feeling good and all I wanted to do was sprint it out. NOT POSSIBLE. I had to be very conscious of my footing and pay close attention to which rock I chose to step on.
Finally at the bottom, I got to stretch out my legs and run for the finish line. Official time was 44:08, which sounds slow but remember I had to run straight up a hill.
Needless to say I am proud of my time. And lets be honest here, my next 5k will look like a major PR! 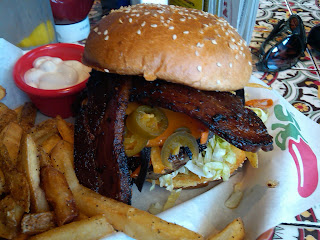 After finishing I was famished and all I could think about was eating something juicy and fattening. So a burger piled with jalapenos and bacon it was. Hello Chili's!

I had every intention of eating the entire thing. But after half of it I felt sooo sick from all the fat as I haven't really been eating a lot of fat. But it was still worth it.
Yes it was only a 5k. But I am a firm believer of rewarding myself for every accomplishment. After eating I even went to the Nike outlet store and indulged myself by buying a new outfit! 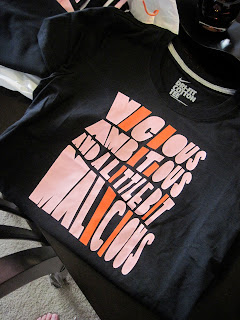 Tomorrow I will post about the lessons I learned from my experience. One little tidbit: If the race is featured in a trail run magazine, expect it to be a tough trail run.
Now, don't forget about my giveaway, see here.

Posted by Heather Elliott @ the desire to run at 12:16 PM