"Girls (Who Run the World)" -Beyonce

Yesterday during my gym workout the Women's US soccer team was playing on the TV. Now, I am not all that into soccer, but any time the US has a chance at winning something I like to watch.

The minute the US won their game (vs. France), Beyonce's "Girls (Who Run the World)" came onto my iPod.


Thought it was interesting and should definitely be the team's theme song should they win on Sunday.
I don't really know all the words to the song but just the course got me thinking...

1) Literally, we RUN the world. Sometimes I think about how many people all over the world are running at the exact moment I am. Thinking about all the places people get to run is amazing. I live in California and although some people might think that is ideal, I miss running in different seasons.

--What's your favorite season to run?
--Send me you favorite picture of the best place you have gotten to run, I'd love to see.

2) I'm not a feminist or anything, but there is just something inspiring when listening to a song about how awesome we women are. (BTW, did you know Beyonce is #9 on the Forbes most powerful people women list???)

Needless to say, I LOVE that song!!

What gets you going during your workout?? A song, a thought, a goal??
Music is definitely my number one during a run!
Posted by Heather Elliott @ the desire to run at 2:26 PM 2 comments

Once is good, but twice is NICE!!

I am really starting to love working out twice a day. I'll actually be sad when I go back to school and I can only workout once.

The numbers on the scale may not be moving much but if nothing else, I am becoming more physically fit.

So speaking of my bike ride, the afternoon one was outdoors on a real bike. It's a "mountain" bike I suppose. It's not the best bike but it does alright. What I am curious of, is if there is a noticeable difference in the way a road bike and mountain bike ride.

I know the road bike if going to be lighter and is actually made for the road. But for you cyclists: is there a difference in feeling between a road and mountain bike? Noticeable gear differences? Difference in the power?

The best thing about working out twice a day???
***Not feeling guilty about watching the NCIS marathon :)


What cross-training workout do you feel best improves your running abilities??
I would love to do the elliptical but my silly feet go numb within 10 minutes on those machines. I am definitely in a biking phase right now.

Posted by Heather Elliott @ the desire to run at 6:33 PM 1 comments

"I wanna get chocolate Wasted!!!"

On Saturday I posted about my recent struggles, see here if you missed it. Since then I have done better and have been "rewarding" myself less often.

However I found that I was still intaking too many little chocolates. They are so tiny, that I found myself reasoning that I could have several. Bad Heather!

Yesterday I made it through the day without any chocolates. I am not one to forbid myself from any one thing for a prolonged time but I HAD to break the chocolate cycle.

Too bad this doesn't exist!
What do you guys eat to nip your sweet tooth?
For you Texans, how are you surviving the heat? The hubby and I are headed to a wedding in a week and a half in Allen, TX and looking at the weather scares me! I will NOT be running outside!

Posted by Heather Elliott @ the desire to run at 5:00 AM 0 comments

I was going to head to the gym with the hubby but a headache kept that from happening. Boo!

Since the hubby works a strange schedule, Sundays and Mondays are his weekend. And well, since I'm a bum, every day is my weekend! Needless to say, we decided to partake in a couple of adult beverages. 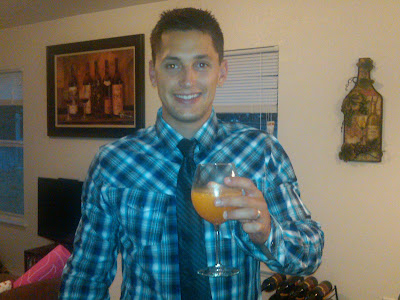 He's so sexy! Sorry, I had to brag for a minute. And yes, we did dress up just to drink at home. It was fun!

My mom and I are both subscribers to Bon Apetit magazine which is awesome because we constantly call each other to let the other know how good something was.

Enter Papaya Margaritas. She made them on July 4th and made sure to point my attention to the recipe. They were so good! And hey, they had fresh papaya, so that's kinda healthy right?

What's your favorite magazine to subscribe to besides RW? (I love Bon Apetit and Cooking Light, I love to cook can you tell?)

Posted by Heather Elliott @ the desire to run at 10:26 AM 1 comments

Struggles with the "I deserve it" excuse

This past week without my computer has been horrible.

I never realized how many programs I use to keep myself accountable. I definitely missed reading and writing blogs, but what I found to be the worst, was my lack of food documentation. I usually use calorie counter and like many things in life, I never realized what I had till it was gone. (Cheezy I know.)

This week my workouts were pretty good. Most days I completed two workouts. What should have been a great thing wasn't because I sabotaged myself with the "I deserve it" excuse.

I found myself thinking, "I worked out twice, I can totally have a piece of chocolate, maybe even two..."(which actually ended up being many more sadly)

Don't worry I don't keep myself from such delicious delights, but I usually only have one piece a day and I track it on my calorie counter. The combo of the "I deserve it" excuse and the lack of documentation led to no accountability and resulted in disaster.

What a terrible mess I am.

At least I have my computer back. Yay now I can come back to calorie counting and blogging.

Do you guys struggle with this excuse? How do you cope?
(I like rewards, but a piece of chocolate each time I do something good just isn't going to help drop those pounds.)

Posted by Heather Elliott @ the desire to run at 10:23 AM 1 comments

I was so excited to return from vacay and tell you all about it. Too bad my computer is acting crazy.

Until then, feel free to email me!
Posted by Heather Elliott @ the desire to run at 10:19 AM 0 comments

I'm Baaaack! And with a vengeance...

Whew! What a trip. Ammmmaaazing. For those of you who are married, I HIGHLY recommend a long road trip before you start popping out kids. We had so much fun and I wish I could just tell you about everything we did. But I don't want to brag....too much anyways :) 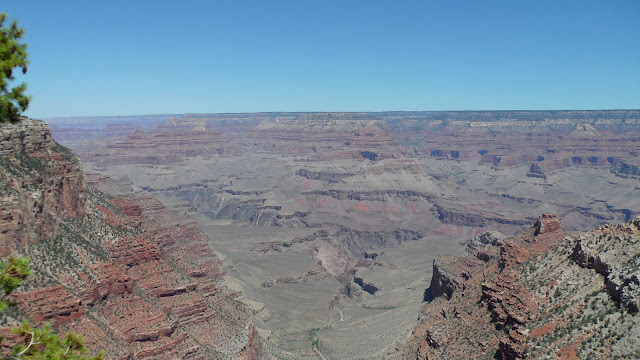 We spent three days enjoying the sights there. 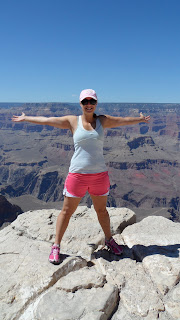 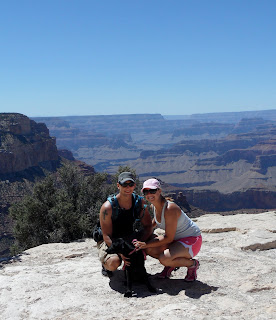 We hiked two different days. "Hiked" may be a mild overstatement however, as the paths along the rim are relatively flat and paved. We weren't able to go below the rim because we had our puppy with us and dogs aren't allowed. We definitely intend to go back some time and hike down the Kaibab trail.

Our nights were spent playing games and reading around the fire.
It was definitely a change of pace and a very welcomed one. 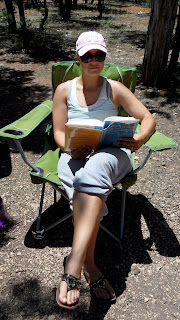 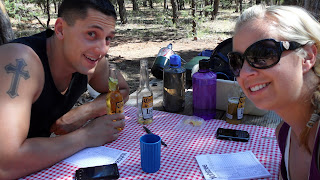 Cons:
While at the G.C. we did a really good job of eating healthy. One night having turkey taco salad and the other night we had turkey burgers. We may or may not have had smores :)
So what am I doing now that I am back from my trip?
Not a whole lot. Miscellaneous, boring , grown up stuff like the budget and organizing the house.
But I am working out... twice a day. Heck yes!
Yesterday, I did an easy 3 miles on the TM at the gym. It had been a while since I ran and I was worried about going at it too hard. In the afternoon, I was feeling stir crazy so I took the dog for a nice long walk. 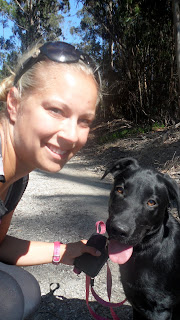 This morning I did a killer arm and back workout that I am already feeling the results from. In a bit I'm going to head out for a 4 mile run. This wind is going to annoy me though.
I have been doing really good watching what I eat. 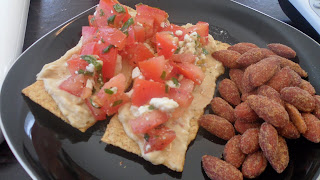 Using a program online I have tracked everything I am eating. I decided that, while I am happy with the way I look, I could stand to lose a little weight. My goal is 10 pounds before school starts. That's 8 weeks, so we'll see what happens.
Okay enough for now. Tomorrow's vacation destination is New Mexico. Ever been there? It was surprisingly beautiful, at least in areas.
What is your favorite National Park you have visited? Any that you really want to visit?
I really want to hit up Utah and visit the Arches, Moab, Zion and Bryce Canyon!

Posted by Heather Elliott @ the desire to run at 1:49 PM 4 comments